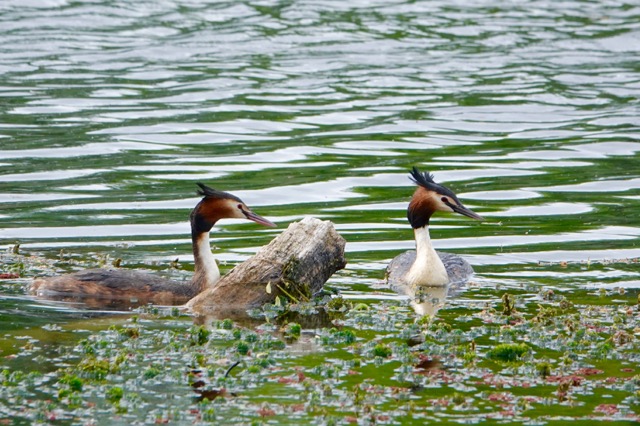 Birdwatching at the Lagoon - Bill Cash

On the 21st of October I was doing my usual monthly bird survey of the Grovetown Lagoon. I start at the car park and head towards the Rowing Club and around finally walking over the hump bridge and back to my car.  Well I was almost to the hump bridge and the end of my survey, when I spotted this rather large bird out on the water then a little further on a second.

Much to my surprise they were great crested grebe and acting very much like a pair. Crested Grebes are one of “THE” birds of the world. Although they are found throughout Europe and in Australia, here in NZ they are confined to the southern lakes area and have always been in low numbers. The first birds to appear in Marlborough was about ten years ago at Lake Elterwater where they have been successfully breeding. Then this year they have suddenly appeared in two other lakes around Blenheim and now at the Grovetown Lagoon.

I have since been back four times and managed to get some ok photos (above). They are definitely acting like a pair displaying to each other, that is holding weed in the bills and shaking there heads. So I am hoping they will breed at the Grovetown Lagoon which will be something special for the Lagoon.

Over the last few months I have managed to see a number of new species (for me) at the Lagoons, a Cirl Bunting, Falcon, Bellbird and Tui. The last two species will definitely be benefitting on all the plantings the numerous volunteers have done around the Lagoon complex. It is in fact looking great.